There are some highly motivating and inspiring quotes that come up with when one searches for Persistence on Google, especially the images section.

The dictionary meaning for “persistence” says, perseverance, tenacity, grit, consistency to keep going. Very inspiring and motivating and we all feel we should do exactly that.

Easier said than done, maybe the widespread opinion. But read this,

“We are made to persist….that’s how we find out who we are.” – Tobias Wolff

I believe this. Simply because that’s extremely evident in the stories of all the successful people in the world. We have been designed in a way that continuing a course of action in spite of the difficulties along the way is the only way to bring out the best in us.
We keep reading that Diamonds are just chunks of coal that never gave up. What makes one give up?

There is a story I had heard a few years ago about a deaf frog. Two frogs accidentally fall in a deep well. All the other frogs nearby gather around the well and start expressing their concern as the two frogs inside the well are trying hard to get out and keep jumping incessantly. Soon the other frogs start shouting that the well is too deep and jumping out may not be an option. One of the frog gets tired of jumping and gives up. The other frog continues jumping. The other frog inside the well and the ones outside keep telling him that it is futile, but he doesn’t listen. Finally, he jumps with all his strength and comes out of the well. Why did this frog not listen to anyone and continued his efforts? Because he was deaf and he couldn’t hear anyone. Well, ironically its a blessing in this frog’s case.
But most of us are not deaf and we keep listening to all these voices and opinions, sometimes its people around us but a lot of times it is also the negative thoughts generated by all the failures of our past experiences. Trust me, our inner voice is pushing us to have faith and be positive. But do we listen? No, the overpowering negative thoughts suppresses that inner voice. We get tired. Fear of failure grips us. And we give up.

Barack Obama once said in his speech in 2006, “Making your mark on the world is hard. If it were easy, everybody would do it. But it’s not. It takes patience, it takes commitment, and it comes with plenty of failure along the way. The real test is not whether you avoid this failure, because you won’t. It’s whether you let it harden or shame you into inaction. or whether you learn from it; whether you choose to persevere.

Why do most of us shame ourselves into inaction ?

Here is another story that touched a nerve,

A well respected speaker began a seminar by showing an audience of 150 people a crisp $20 bill. He asked, “Who wants this $20 bill?”

All 150 people nodded.
He said, “I am going to give this money to someone, but first….” Then he proceeded to crumple the bill up. He asked the crowd again if anyone wanted it.

All 150 hands went up in the air.
The speaker then dropped the money on the floor and stomped all over it. He then raised it in the air to show the crowd. The money was filthy. “Does anyone want it now?”

Every hand went up.

The speaker proceeded to tell the crowd that no matter what he did to ruin the money, people still wanted it because its value remained the same. It was still worth $20.

Life often beats us up to the point where we feel inadequate. We deal with bad circumstances and make bad choices that we have to deal with later. However, no matter what we go through, our value will remain the same.

I would dispute the notion that our value remains the same. No! These experiences actually increases our vigour, our maturity, our capacity to handle pressures smoothly increases our value much more. That’s Life’s way of preparing us for the goal that we are meant to achieve, the purpose of our life. Arguably the only way of converting the chunks of charcoal to diamonds! And here we are, doubting our self worth!

Hence I believe that we have been designed to persist and unlock our true potential to actualize our purpose in life.

I would invite people reading this blog to give this a thought. Believe in yourself, realize your value and keep going forward to achieve all the goals that you have set for yourself. Its a path of Thinking Positive and Living Positive! 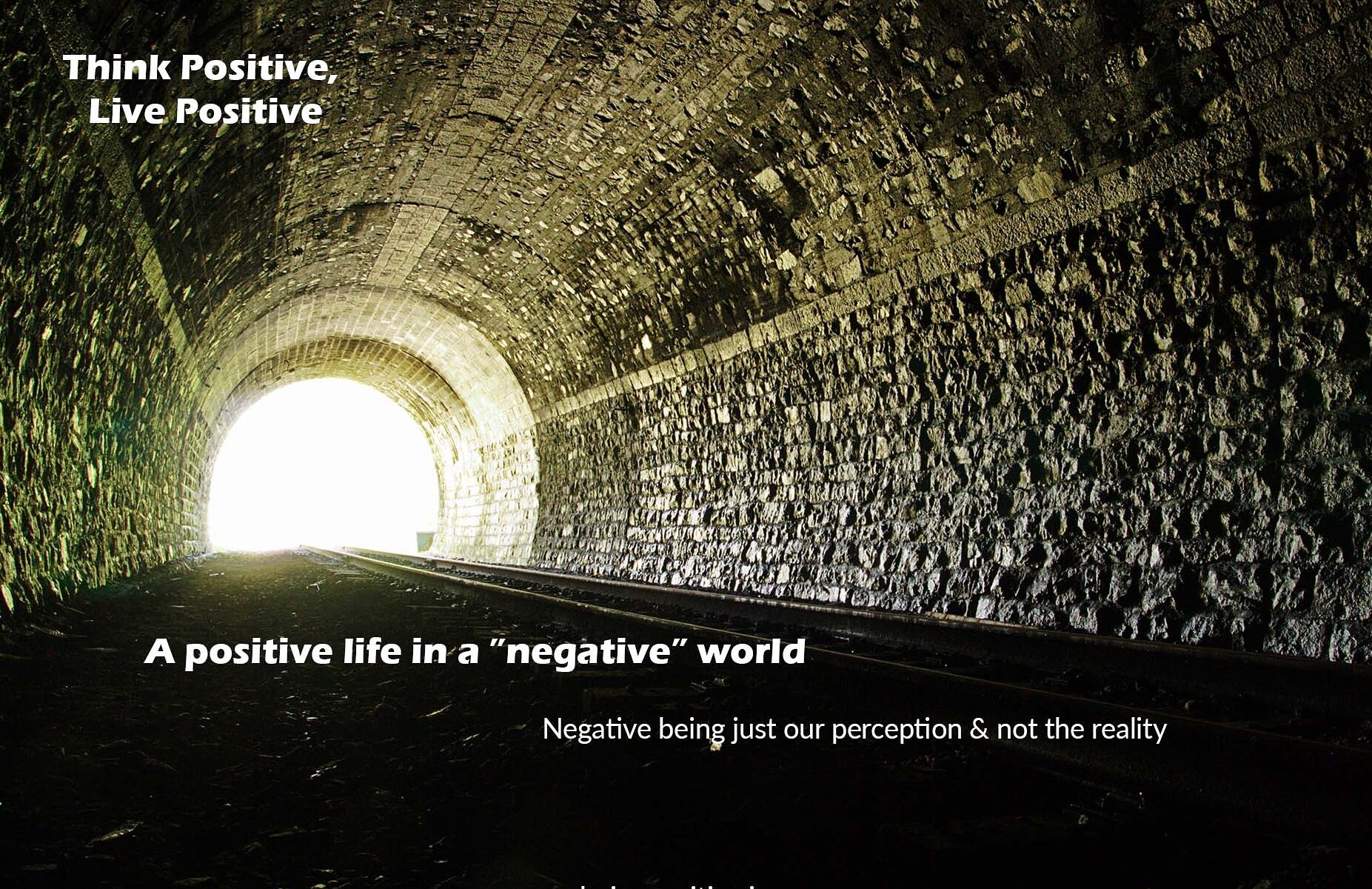 I have been reading a lot about positive thinking and even talking to a lot of people about it and today I came across a beautiful quote by Lindsey Vonn, “Life changes very quickly, in a positive way, if you let it.”

If we let it – being the takeaway from that quote. In the past I have tried to decipher this by saying Why would I not want my life to be positive. Of course I want my life to be positive, but “its not me” is where I was stuck. For instance, I always had difference of opinions with my father at work. I still do. And I always attributed that to being the reason of us not getting along or me being in a bad mood. And hence he was the cause of my negativity.
It was never me. I would never own it up and keep justifying how it starts with one disagreement and then one thing leads to another and it just turns out to be a very bad day.
But I m glad that although I still have disagreements with him, (most times) I am able to shed off the negative thoughts provoked or surfaced due to that.

Another example that I can share is about a discussion I had with a young graduate about his career. He seemed lost. Sincerity and working hard was not a problem for him. His problem was that he had no goals set for himself. He believed he was taking Life as it comes. Further into the conversation, I realized that this was an escape route for him in order to deal with his fear of failure.
I think and again I say this from my own experience that Fear of Failure pushes the most capable people to maintain the status quo. When there is no goal, there is no accountability, there is no reason for anyone to question your achievements and capabilities.

Unfortunately, lot of parents impose their expectations, their aspirations on their kids. As a kid I remember that scoring good marks in the exam was equivalent to being a smart and intelligent child. Not the truth but that’s how most people from my generation were brought up. I am not sure if it has changed a lot.
As ridiculous as it is we all know that every child CANNOT score great marks in every subject in every exam and every child CANNOT bang the most coveted 1st Rank!
I believe this slowly erodes the child’s positive attitude. Constant criticism, constant comparison with an “apparent” brighter kid, constantly competing with peers leads to them forgetting their interests, their originality. They tend to get into a race to prove their worth not just to their parents, teachers and people they look up to – but themselves.

This is just one example of expectations of grades during school times but we can relate with this to a lot of things in life like peer pressure, relationships, outer appearances like looks & weight, social media pressures, earning more money etc etc etc …and its all about proving one’s self worth to ourselves under the pretext of irrelevant and futile things like acceptance from society.

I believe, the root cause of the negative attitude in our mind is a notion that constantly tells us, ‘You are not good enough’. And we start believing it and this is how we live our life.

That negative attitude has to be uprooted but its not a one-time activity. This is a daily constant cleansing process. I am sure each one of us tries their level best to overcome the negative thoughts with positive thoughts. If someone reading this blog has managed to do it, awesome! But a lot of us (including me) get derailed. That little devilish voice creeps in and tells us – There is no point, you are just not good enough. We need to shut that voice completely. To ensure that there is no self doubt and not a single negative thought penetrates into our mind, we need to train our mind accordingly.

Things which seem unthinkable, unimaginable, difficult, complex, hurtful, painful are all to be embraced and assimilated with the same positive energy. It maybe difficult but its the only way to peace and a truly beautiful positive life

I would like to share a beautiful video conceptualized by Rob Dial on Why positive thinking doesn’t work.

I cannot think of a better way to explain this. Its perfect and conveys the exact meaning accurately. Also, its so simple to relate and remind ourselves that we need to cleanse constantly.

I share this with the hope to make a positive impact on at least one person reading this blog. There is a lot of negativity in the world. This is my attempt to help someone find their path to cleansing and eventually peace and happiness.